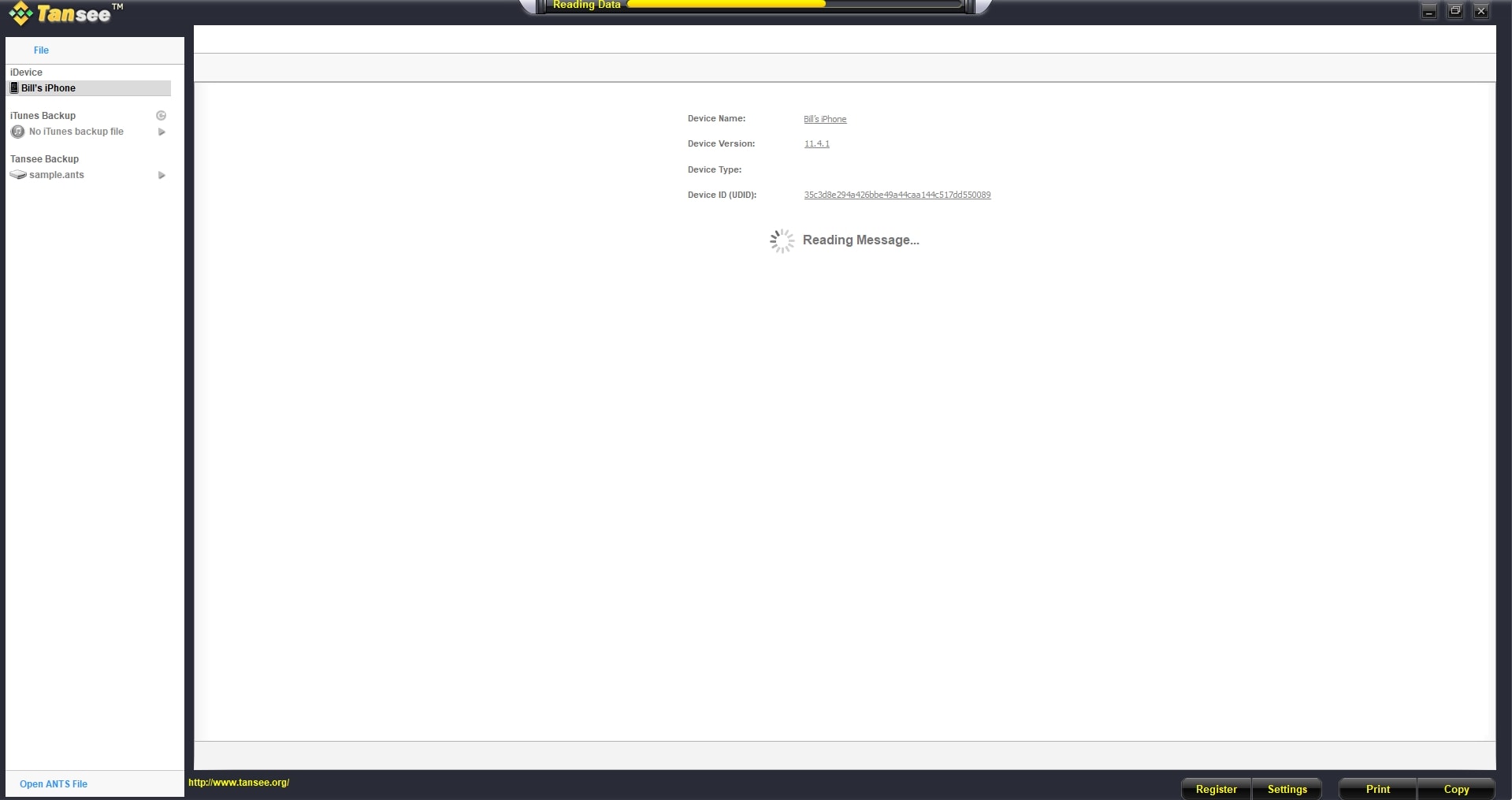 In this Tansee iOS Message Transfer Review we will find out if in fact this utility makes backing up messages on your iOS device easier. Even though the iPhone is arguably one of the most popular smartphones with an easy to use interface and a relatively bug-free experience many aspects of it continue to be frustrating. Perhaps one of the most difficult aspects of using an iPhone or switching to a new one is backing up and restoring messages. “How to backup contacts on iPhone” is probably one of the most searched terms with heated debates across all public forms online.

Interestingly the iPhone was meant to make life easy but in this instance, i.e., creating backups and restoring them it does not. Thankfully third-party software developers are smart enough to take advantage of the situation and make some money in the process. That’s where Tansee iOS Message Transfer comes in.

The problem is that even though iTunes is supposed to make life easier when it comes to backing up messages, videos, and a bunch of other stuff it does not always work. You’re also going to be in hot water if running an older version of iOS like 9.0 and below.

Tansee iOS Message Transfer makes iPhone backup a lot easier. It fills a huge hole that Apple seems to have missed. If anything, it aims to make backing up and restoring SMS messages as simple as a few clicks. However, since we all know that iOS can be painful at times most are doubtful if a third-party can do a better job than the tech geniuses at Apple. That’s what we’ll be examining in this review.

We’ll try to figure out in this Tansee iOS Message Transfer Review if it is a better option and worth paying for instead of fumbling around with iTunes. We will also explore the difference between the free and paid version of Tansee iOS Message Transfer. Read through our entire review or skip to the final verdict if you want to know the conclusion we’ve reached based on our testing and comparison of the software.

Backup MMS, iMessages and SMS directly from an iPad, iPhone or any other iOS device Let’s just clarify for everyone reading this Tansee iOS Message Transfer Review that we are using the trial version for this review. The reason why we are using the free and not the paid version isn’t because of being broke reviewers, but instead, want also to figure out what limitations are imposed beyond the ten messages limitation for the free version. If it was really possible to backup the iPhone to PC with the free version.

The SMS, iMessages and MMS backup feature seems to be available in the free version. We fired up the software, and hooked up our iPhone 7S Plus running iOS 11.4.1 Instantly, the backup messages iPhone feature powered up and started to read or access messages on the phone. It took around 10 minutes for the process to complete. Once complete we could read, search, and access all SMS/MMS, Whatsapp and iMessage messages, as well as Whatsapp Games.

Interestingly, by clicking on the ‘Copy’ button below allowed us to back up all the messages in a number of different formats. The formats allowed are:

You can also choose to password protect the backup files which are always a great idea. Plus, there is an option which prevents saving of MMS messages. You may need this option if the MMS messages aren’t necessary or to save space.

You can also go through the entire list of messages and choose what you don’t want to back up. By default, all messages are backed up. That means the entire WhatsApp, SMS/MMS, and Facebook Messenger database is backed up on to the computer.

By default, Tansee iOS Message Transfer backs up all WhatsApp messages. That means you don’t need iTunes or any other software in between. We think this is a neat feature. All you’ve got to do is choose the WhatsApp tab, click on ‘Copy’ below on the right, and choose what messages you don’t want backed up. Depending on the number of messages and their size it can take up to an hour like it did in our case.

The other interesting fact we found during the Tansee iOS Message Transfer Review is that you can manually backup iPhone, iPad and other iOS devices (maybe the Apple Watch but that hasn’t been tested yet). Though you are more than welcome to give it a shot if you’re using one of Apple’s newer watches with LTE support.

Now if you have been diligently backing up your iPhone via iTunes, but for some reason, things are not working out, Tansee iOS Message Transfer can help. Using the software, you can navigate to the folder where iTunes used to save the backup files, click there are restore the messages you want.

The one thing you need to be careful of is to chose the right backup file. Newer backups overwrite the old backup on the iPhone which is something that iTunes does too. So, if you’re making another backup with iTunes ensure it is in a different folder or better yet another computer. That way if you want to restore an older version of the backup files it is possible.

However, we know that the overwriting of the old with new is not Tansee iOS Message Transfer’s fault entirely, but it pays to be careful.

Recover Deleted Messages from an iOS device Without using iTunes The great thing about Tansee iOS Message Transfer is that you can make multiple backups in different locations without an issue. So, if you happen to mistakenly delete messages on your iPhone or iPad and later realize it was important it can be restored from the backup.

When you open the “samples.ant” link right below the “Tansee Backup” on the left. Choose the directory where the backup is stored, and in a few minutes, all the messages that were backed up are displayed.

You can then choose which messages to restore. You also have the option of restoring all messages. If you ever asked yourself “How do I backup my iPhone to My computer?” well this is the easiest way to do it and it's free to restore messages too.

Caution: We forgot to mention in the main Tansee iOS Message Transfer Review that any messages you delete from the backup file cannot be restored. So, think twice before you remove anything because the software does not have an “undo” option just yet. The “Print” feature below on the right enables you to print a single message or all messages. It is one of the easiest ways to print messages, and it's insane how Apple didn’t think that iTunes should have made this feature. Anyone who uses their phone for work, i.e. to receive important files, messages, etc. will find this a handy feature.

Printing messages is also very easy. All you need is click print, choose the messages you want printed, set up the page and you’re done. In our testing, we found that the printing was a second slower than what we are typically used to. But that could be the lag between the software and the print API on our Windows Computer or some other issue.

The print feature will also work if your backup iPad to computer too. The process will be the same.

Limitations with the Free or Unregistered Version

We have established in this Tansee iOS Message Transfer Review that whether you want to backup iPad to computer or restore deleted messages on your iPhone the software handles it all. However, the ‘Free’ or ‘Unregistered’ version of the software is deliberately limited in what it can do. We expect it to be crippled somehow since nothing worth using is ever free!

Now for starters users can only back up the first 10 messages on your iPad or iPhone. That means if you want to back up more, it is important to pay. The other limitation which is sort of irritating is the nag screen.

Now we’ve already run through the majority of pros above. However, what we’ve not been through are the cons. That said there are still a few pros we might have missed. So, let’s start with the “Pros” and finish up with what we think is “Cons.”

Free to Use and Test

The fact that we could back up a few messages from our iPhone, and then restore it allowed us to ensure that the software works. It also gave us the confidence that it was not too overly complicated, unlike some other competing options.

When you want to backup iPhone contacts, the software gets right to the point. There is no eye candy which is surprising for a piece of software geared towards iOS users. But in a way that’s a good thing because getting right to work is easy.

Tansee iOS Message Transfer’s setup file is a mere 25-28 MB. Once installed it takes up around 40MB at best. That’s a pretty small footprint, especially when compared to iTunes which is several hundred megabytes. Plus, because of its small footprint it loads quickly. It can also be installed on an older, slower computer without a hitch.

The supported file formats like .mht and ant are somewhat obscure. Since they are not commonly used you can’t view your messages using any other software other than Tansee iOS Message Transfer. It is a con for anyone who wants to make a backup and then perhaps a few years later be able to access that backup. But if they haven’t paid to subscribe even after those years then the files can’t be restored.

So, if someone sent you a message with a picture in it, that can’t be printed out. Also, that message isn’t saved with the image. However, the image can be saved in a separate folder on the computer. All of this makes it very difficult to check the original content of a message.

You can only backup iPhone contacts via messages, but not videos, music, calendars, and pictures. So, it may not be the so-called one-stop solution some people are looking for to fulfill all their needs.

What Tansee iOS Message Transfer offers is a very straightforward way of backing up all the messages on your iOS device. The developers have focused on developing one piece of software that specializes and excels at doing one job only, and we think it does a great job. It is very easy to backup iPad, iPhone or any other iOS device. Also, restoration is straightforward.

Unlike iTunes which seems to overcomplicate the process Tansee iOS Message Transfer is a breeze to use. Also, the printing of messages is a single click away. As a matter of fact, the software allows you to accomplish most tasks with a few clicks. Its relatively small footprint also means that it does not bog down your computer and can be used with older computers with little ram and hard drive space.