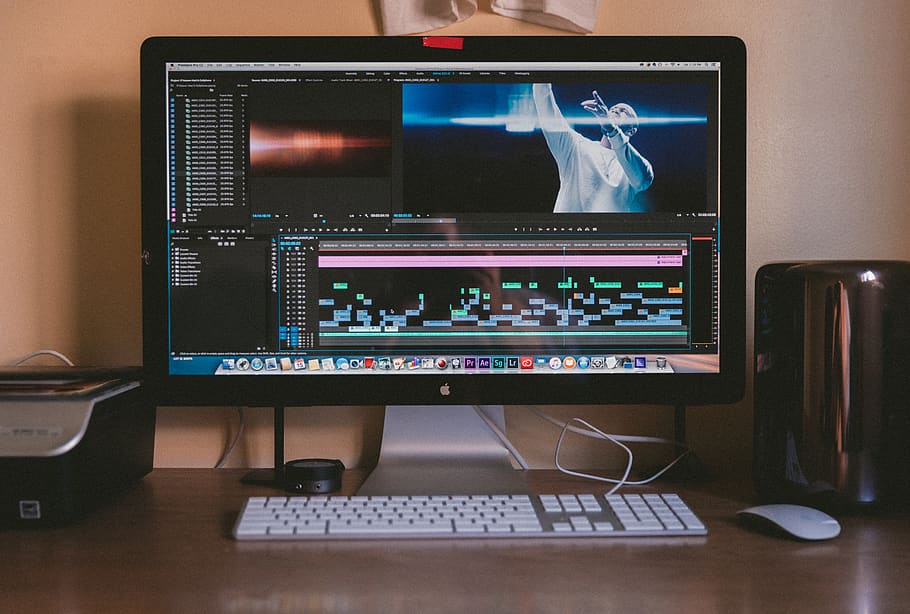 How much RAM do I need for 4K Video Editing?

It’s one of the most commonly asked questions among amateur and professional editors alike when approaching Ultra-HD project for the first time:

For obvious reasons, editing 4K video isn’t something you can do on an entry-level machine with next to no RAM or video RAM. 4K videos are notoriously power-hungry when it comes to the system specs needed to work on them, but what’s the bare-minimum PC setup you can get away with?

More importantly, what specs do you need for 4K video editing if you’re intent on producing professional quality results?

In this brief introductory guide, I’ll be taking a look at the basics of appropriate video editing hardware for 4K video and the other main considerations to take into account before starting your project.

Just to differentiate between these two types of memory right off the bat, RAM stands for Random Access Memory and VRAM stands for Video RAM.  The difference being that while RAM is the main source of memory used by your computer, Video RAM is used exclusively for processing video data.

RAM influences the speed, efficiency and multi-tasking capabilities of your computer as a whole – Video RAM improves its capacity to display multiple 2D and 3D images at the same time.

As mentioned, it all comes down to the system requirements of the software you intend to use….and ensuring your machine meets at least the specification. And don’t forget it’s not all about RAM – your CPU, GPU, video card, VRAM and even the quality of your hard drive will also play a role.

The most important thing to remember when it comes to RAM is that you need different amounts for different use cases. It all depends on how you intend to put your system to use, which means considering the following three factors to determine your requirements:

It’s also worth noting that just meeting the minimum system requirements of a software suite to the letter doesn’t mean it will perform adequately – more is always better.

In terms of video rendering, the amount of RAM you have doesn’t actually have a huge impact on rendering speeds. This is where your computer’s GPU and CPU handle most of the heavy lifting, though in both instances count on at least a decent amount of RAM to keep your system running smoothly and with stability throughout the process.

In any case, to upgrade from say 4GB to 16GB of RAM will probably result in a noticeable difference to rendering speeds. By contrast, switching from 16GB to 64GB RAM probably won’t. However, having more RAM will enable you to multi-task and get other things done while your computer handles the rendering process in the background.

Should you upgrade your RAM?

Is 32GB RAM overkill for video editing? Not in the slightest – it’s actually becoming the recommended standard for Ultra-HD editing at a professional level. 64GB being even better, if you can stretch to it.

When going about your video editing PC build, it’s important to bear in mind that while RAM is important, it isn’t everything. If your CPU and GPU are pure garbage, all the RAM in the world isn’t going to make any difference. In addition, you’ll also need to ensure that your main board is compatible with the RAM you intend to install.

Setting yourself up with a good graphics card for video editing is just as important as having plenty of RAM. Nevertheless, anyone attempting to get by with 4GB RAM isn’t going to get very far – even an 8GB machine may struggle with today’s most advanced software like the gem we covered in our Animoto review.

Here’s the good news – RAM prices have been plummeting over recent years.  Back in 2018, upgrading your system with a 32GB DDR4 Kit would have set you back around $400. Today, you’re looking at no more than around $150 for the same kit.

Assuming you’ve a suitably powerful CPU and GPU for video editing, stepping things up with a RAM upgrade kit can be a surprisingly affordable investment. Again, just as long as you make sure in advance that your main board is compatible with the RAM you intend to buy.

It not, it may be time to reconsider your video editing setup in its entirety and start out again with something new.

Referring back to the original question – how much RAM do you need for video editing?
The short answer is actually quite simple – however much RAM you need to run your preferred software suite smoothly and without lag.

This basically means considering the system requirements of the software you’re interested in and ensuring your system exceeds them. As mentioned previously, scraping by with just the bare minimum requirements isn’t a good idea. You may get the software running, but put it to the test with a challenging 4K editing project and it’ll quickly grind to a halt.

A typical use case of an average Video Editor

One of the main reasons the bare-minimum RAM requirement can be misleading is the fact that you don’t actually have as much available RAM as you may think you do. In a typical everyday example, let’s say you’re running Windows 10 with a couple of Chrome Browser windows open and Adobe Photoshop. Before even firing up your video editing software, you’re probably looking at somewhere in the region of 6.5GB of RAM being swallowed up by these applications alone.

If you’ve only 8GB of RAM to play with, that’s 1.5GB left over for your 4K video editing projects. Which is, by no stretch of imagination, anywhere near enough.

It’s worth remembering that everything you’re doing on your computer at the time (including running the operating system itself) puts a dent in your computer’s capabilities at the time. Your total RAM is therefore never your actual available RAM – something to take into account when evaluating your specs.

Given all of the above, what would you need to do to build a future-proof PC for 4K video editing? What kind of machine would you need right now that would still get the job done in years to come?

To be frank, there’s no such thing as a future-proof machine. Cast your mind back to the computers of five years ago and what was a $5,000 super-computer at the time would today be considered entry-level at best. Sooner or later, even the highest-spec machines are left in the dust.